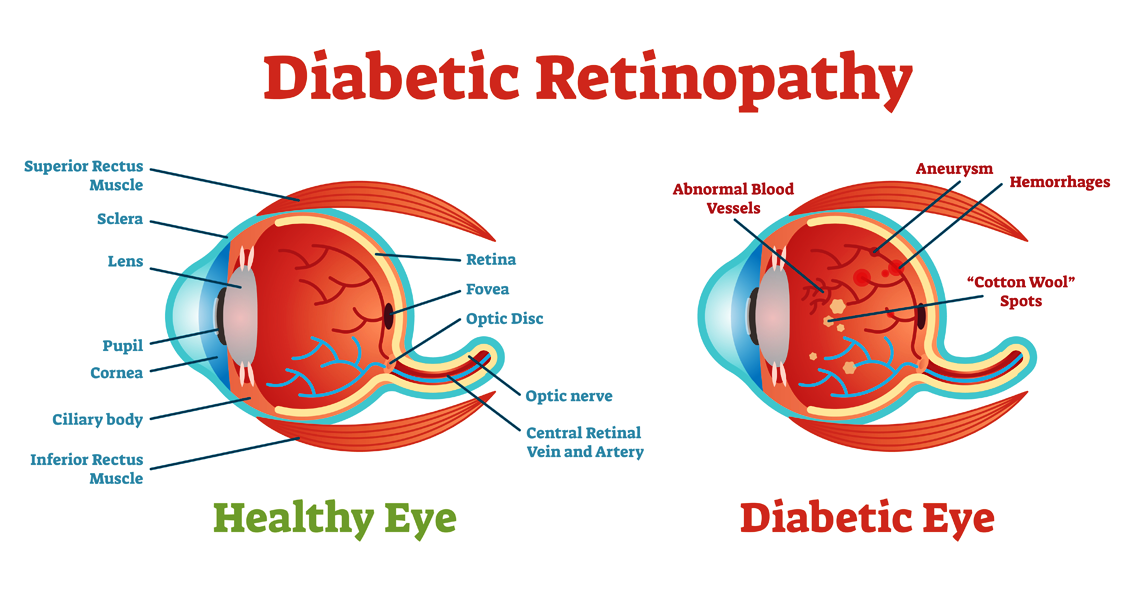 Diabetic retinopathy is an eye condition that affects the retina in people who have diabetes.

The retina is the light-sensitive tissue that lines the back of the eye, and detects light that is then processed as an image by the brain. Chronically high blood sugar or large fluctuations in blood sugar can damage the blood vessels in the retina. This can result in bleeding in the retina or leakage of fluid.

Non-proliferative diabetic retinopathy: In the early stage of the disease, there is weakening of the blood vessels in the retina that causes out-pouching called microaneurysms. These microaneurysms can leak fluid into the retina. There can also be yellow deposits called hard exudates present in the retina from leaky vessels.

Diabetic macula edema is when the fluid leaks into the region of the retina called the macula. The macula is important for sharp, central vision needed for reading and driving. The accumulation of fluid in the macula causes blurry vision.

Proliferative diabetic retinopathy: As diabetic retinopathy progresses, new blood vessels grow on the surface of the retina. These blood vessels are fragile, which makes them likely to bleed into the vitreous, which is the clear gel that fills the middle of the eye. Bleeding inside the eye is seen as floaters or spots. Over time, scar tissue can then form on the surface of the retina and contract, leading to a retinal detachment. This is similar to wallpaper contracting and peeling away from the wall. If left untreated, retinal detachment can lead to loss of vision.